The Roads to Springdell Rules 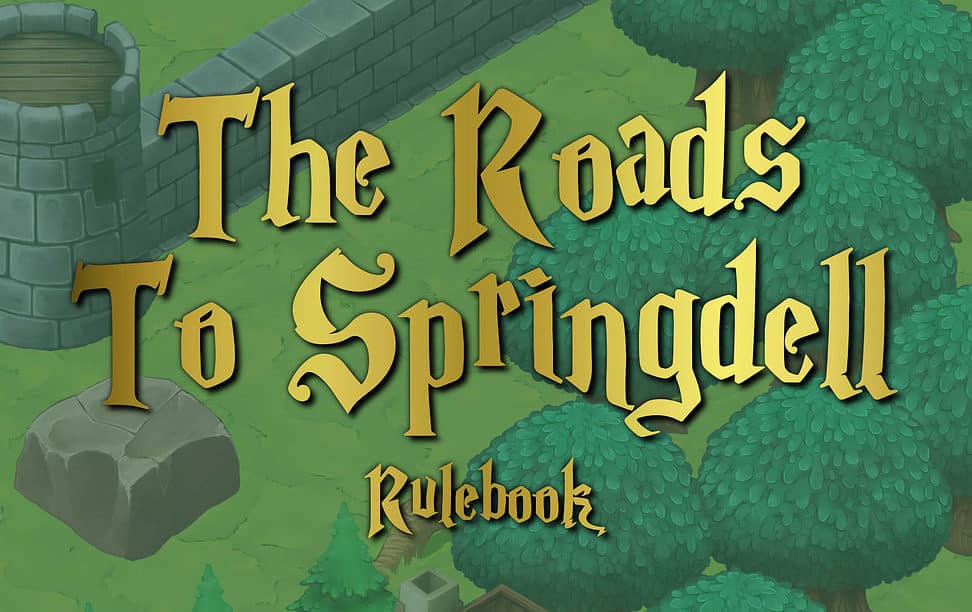 Springdell is a gentle little town, a little down the road from here. Everyone who passes through here, it seems, is on the way to Springdell. A bit bigger than here, but not by much. Why, says a-plenty that Springdell’s the biggest town around, considering how it is. But you’ve been walking long—come, sit, and stay here at the tavern for a while.

The Roads To Springdell requires players who are capable of seeing the cards in each other’s towns, a small space for players to build their towns, and a space everyone can see where the town of Springdell itself can be built. Because much of the scoring in the game involves doing math, it can be difficult to track your performance against other players’ performance if this information is not made clear. Players do not need to talk once the game has begun and the rules are understood. Players should not need to touch anyone else’s town in progress.

In your copy of The Roads To Springell, you should have the following:

Each of the Town cards is numbered from 1 to 48.

The goal of The Roads To Springdell is to have the most prosperous town of each player. Your town forms around your Tavern, and its value is measured on the value of the cards that wind up in Springdell.

At the start of the game, give each player a Tavern. Then, take the numbered Town cards, shuffle that deck, and deal six cards to each player, then deal three Town cards, face-up into a common space.

These face-up cards are the start of Springdell.

Play is divided into a series of tricks. At the start of each trick, flip the top card of the deck and add it, face-up, to the trick.

Players then get to choose a card in the trick to add to their town, in order from lowest number to highest number.

When each player has chosen a card and added it to their town, the remaining card is added to Springdell. With this, the trick is over, and players can move on to the next trick.

After players have revealed their cards, but before they have taken cards, players can elect to flip a Town card in their own town face-down, turning it into a Forest. If they do this, they can change the number of their card in the trick by the value of the flipped-down card. They can either add those values, or subtract the larger number from the smaller number.

This allows players to try and change their position in the trick order. Players can only flip one card per trick.

Forests do not have any special value on their own and do not, by default, represent any points.

When the last trick has been played, and the ninth card is added to Springdell, and the sixth card is placed in each town, the game is over and it’s time to score the towns.

The player with the most points is the winner of the game!

Art By: Anibal Casas, via thegameassetsmine.com

Special Thanks to Fox, Pendix, and my nephews