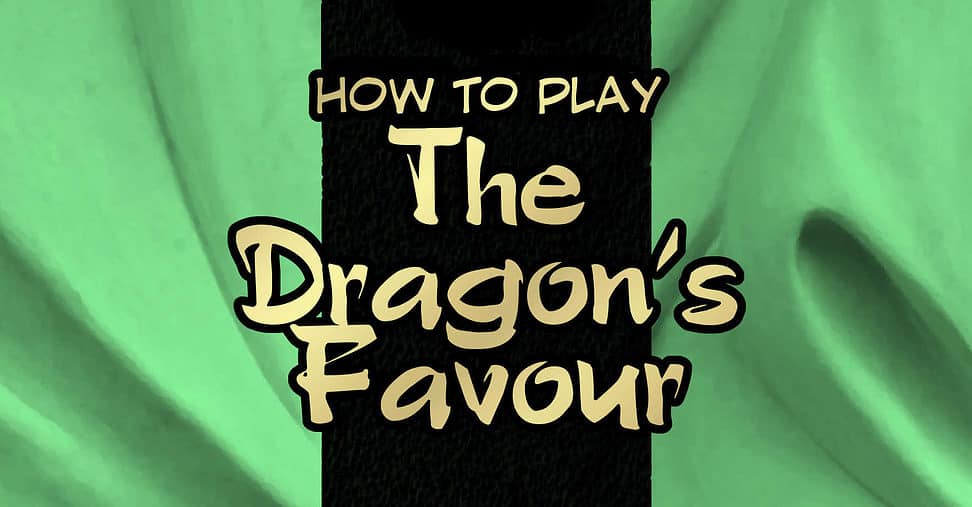 In an empire of a hundred million souls, it is not the actions of an individual that change the course of history, but the actions of the systems. Therefore, it is not the heroes in the streets or the words of kings, no—in the Dragon’s Empire, it is the matter of the magistrates and the lawkeepers, the rulemakers and paper-keepers who can turn the systems that change the world.

And now, one such seat has become available.

The Dragon’s Favour requires a stable place for players to place cards in common access to one another. You need some counters to track people’s Favour scores. Players don’t need to hold up their cards, and don’t need to check their hands regularly.

The game doesn’t require any shuffling. Players do need to be able to read their cards, but cards’ behaviour doesn’t change.

In your copy of The Dragon’s Favour, you should have the following:

The Empire of the Dragon is a vast, rolling nation made up of many different nations. Over time, the Empire’s culture pulled them together, spreading the subtle lie that all nations are but clans, all clans but different siblings under the Dragon’s imperial grace.

Spread across vast land, reaching from deserts to jungles to mountains and the great walls that hem in the Empire against invaders, the Empire is administered from the great Imperial capital on the Imperial Isle. The Imperial Isle is sacred ground—only the most blessed by the Dragon can even visit.

This enormous structure, this nation made of nations is overseen by a veritable army of paperwork-tracking, detail-hunting bureaucrats, who each answer above them to a Magistrate. What happens in the Empire doesn’t happen unless a Magistrate sees it.

And thus we come to the latest contention. Magistrates are impartial members of the Celestial bureaucracy. Once selected, they are said to lose their clan affiliation, to no longer belong to their families and become part of the Celestial Bureaucracy. They are not to rule in the favour of whatever family they once belonged to, and they are not, absolutely not, meant to be influenced by the process that selected them.

So, the delegations sent to the Imperial Isle from the great clans attempting to influence the selection of the Magistrate to occupy this empty seat are:

Craftspeople and artisans of the Empire, the Ox Clan are (almost) the lone clan owning buildings and structures on the Imperial Isle. Ox crafting is the greatest in the Empire, with the finest and most skilled artisans. The Ox clan craft the infrastructure of the Isle and the palaces of the Dragon both; beauty and function as one clan’s skill.

The Ox clan have the greatest artisans in the Empire.

The Ox clan do not have merchants. As the material custodians of the Imperial Isle, they do not engage in trade, and simply contribute all their production to the Dragon Clan. The Dragon, as is their grace and dignity, return to the Ox clan gold sufficient for their needs.

The Crane clan own the riverways and seas of the Dragon’s Empire. They are expert sailors, which in turn gave them overwhelming value as traders and as a naval power. Constantly at war with pirates and coastal bandits, the Crane clan consider themselves blessed above the other Celestial Clans, as they have special permission to build warehouses, docks and establishments on the Imperial isle, a permission denied all other Celestial clans.

Thanks to their skill shipping goods and trading, the Crane clan boast some of the most excellent merchants in the Empire.

The Crane clan do not have suppliers. While they can own warehouses, it is a crucial rule to the Dragon that those warehouses are overseen by Dragon and Ox managers, not by the Crane themselves. In this way, the Dragon maintains its control.

The Tiger clan are the militaristic arm of the Celestial empire. Proud, regal, permanently militaristic, the Tiger clan have laws against spies and assassination, seeing all such engagements as dishonourable. The Tiger clan oversee a huge serf population who they do not consider ‘members’ of the clan, as they lack military qualifications or land holdings.

The Tiger clan have the most excellent Soldiers. The Tiger clan delegation has two soldiers, allowing them commit to public duels and shows and demonstrations of force.

The Tiger clan do not have Assassins. If a tiger clan noble wants enemies dead, they are expected to order them into a duel. They see this as natural and are often very confused when enemies refuse duels.

Boar clan tell stories of how they were once members of the Ox clan, the mainland-dwelling group that own and run the mines, the stores, and the farms, and as time went on, the Ox and the Boar grew apart. It is thus the Boar see themselves: the suppliers to the Ox’s Artisans, the workers who give the Ox steel and stone. The Ox do not tell these stories.

The Boar clan are expert suppliers. Even when they are in locations they do
not own any warehouses or any stock, they are skilled at distributing goods.

The Boar clan do not, to the minds of the Magistrates, have Artisans. They
instead send their wares to other clans to be crafted.

The Fox clan are expert negotiators, deal-makers and brokers. They are so famously skilled, they have a reputation as being untrustworthy, which has led to even more expert manipulation of a reputation of the cunning Fox.

The Fox clan are known for their exceptionally shrewd negotiating nobles.

The Fox clan delegations do not travel with Soldiers. They do have their own armed forces, but to travel with them would be to imply a degree of threat that the Fox see as unnecessary and churlish.

The Rat clan see themselves as the youngest Celestial clan; the one who was most recently uplifted by the Dragon clan’s emperor. The other Celestial clans see the Rat clan as a terrestrial clan that was subject of a lucky sorting error, and they are not happy about this. This means that the Rat clan are always struggling for legitimacy in the dealings of the greater clans.

The Rat tend to respond to this sort of disrespect by employing ruthlessly efficient assassins.

The Rat clan delegations cannot send Nobles to the Imperial Isle. The Rat clan’s nobility are not considered, by the other clans, to be Celestial nobility—and that means they may as well not exist.

Each player begins by choosing a clan, identified by the clan’s symbol on each side, to play. Players then take all the cards of their clan, and return all unused clans to the box. Deal out the six Voting cards onto the table in front of each player, face up, in alphabetical order—Artisan, Assassin, Merchant, Noble, Soldier, Supplier. If someone is playing the Dragon, that player becomes the first Judge, but if nobody is playing the Dragon, randomly choose some other player to be the Judge.

The Judge nominates a number of votes per player; one, three, or five. You can’t pick more votes than you currently have cards, and if there’s more than five players, that player can only choose one or three.

Each other player then places down one of their Clan role cards, face-down, on one of the voting cards. Players can place their cards simultaneously, or move them based on observing other players. Once the other players have placed their Clan card, the Judge places their own, alone. Repeat this process until the Judge has placed a number of cards equal to the number of votes they nominated.

Judge’s Note: It’s possible players take a long time to work out their votes, and may need someone to hurry them along. If this is the case, as Judge, you can give people a countdown, and if they do not place a vote in that time, they have to put a card down at random. This is optional—don’t use this rule unless all players agree at the start of the game they need it.

Voter’s Note: You can offer people Favour or deals to vote in a particular way. Negotiations are, after all, part of the game. Just there’s no punishment in the game for people breaking deals!

Once the votes are placed, players move to the next step:

Each player takes the cards they voted, and turn them face up. You turn all
your cards over at once.

Then, each player takes one of the cards they played this round, and puts it face down next to them. That card represents a member of the delegation who has had to head home, and is no longer available to try and convince the Magistrates.

Every time a player gains Favour, they get a small token or counter that lets them track what they have. When you gain Great favour, you get two of these tokens. These tokens are how you determine victory. You can trade Favour, encouraging people to vote your way, or discouraging them from voting for someone else.

When you assassinate a role, the character of that role is immediately withdrawn from play—if their card still had some effect or other to do, it doesn’t have a chance to take effect. At resolution, Assassinated characters are always the ones sent home.

It’s possible in some situations that an Assassin could assassinate two of the same type of card from one player; in that case, only one of those cards is sent home.

New players aren’t going to be aware of what each card role does. They can look at their own cards, but they’ll miss a card in most clans. It’s okay to show players the cards from your hand, before voting. That’s not meaningfully hidden information.

Creative Commons Resources: This game was made with GIMP, FoxitPDF reader and Scribus. This manual was made in Word, and the parchment and drapery images were from public domain images.

All the Chinese characters in this game are derived from Google Translate, and will be corrected if it turns out I did something really silly.

Special Thanks:
To Æryn, for logical space reasoning
Elli, for dog walking
Fox, for working on the symbols
The Snoot Consultant
Pendix, for getting the setting started