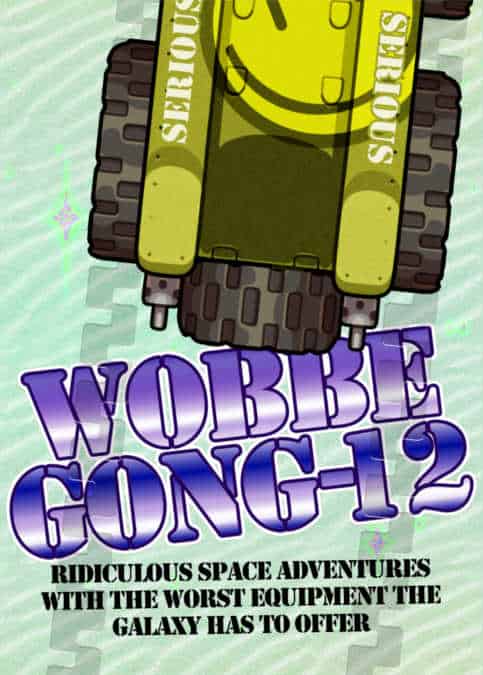 Here at Invincible Ink we’d like to announce the launch of Wobbegong-12! If you’ve ever played a space adventure with an elegant, sleek rover and thought to yourself this game needs more stop-starts and embarassing crashes into the scenery, if you’ve ever wanted the arm-bending mechanical challenge of Twister without rubbing anyone else’s body, if you’ve ever wondered where are the crap parts of space, then Wobbegong-12 might be for you. Sound cool? You can get all of this for $10, here, on DriveThruRPG!

Wobbegong-12 started out as a microgame, with the question how small can a game be and still be fun to play. I made the original of Wobbegong-12 with four cards, one of which was torn into quarters. What kept it from being a microsized game, however, was when I learned that DriveThruCards would only ship cards in quantities of 20 – less than that, and people wanting to buy Wobbegong would have to buy other stuff as well.

Furthering the expansion of the game was the realisation that my design, that envisioned players capable of holding up their arms and running around a table, was incredibly limited by ability. So, the rest of the design space of the game went towards overcoming that. There were new rules variants that allowed you to slow the game down, or keep people from struggling over the same card, or that allowed a player who was immobile to turn into a rover-stealing monster threat, described as a ‘lurking hippo.’

Wobbegong-12 is a game you play a few rounds of. It’s silly and it’s active; you have to flick a rover, keep an eye on your friends, try to manage a very frustrating task, and then you might just lose out of nowhere. This isn’t a game for the super competitive amongst you. But it is funny, it is silly, and it is designed to evoke that same feeling of piloting a bouncy castle with wheels that I had in playing old videogames set in spaaaaace.

With that in mind, if you like the sound of it, or the style – consider buying it!