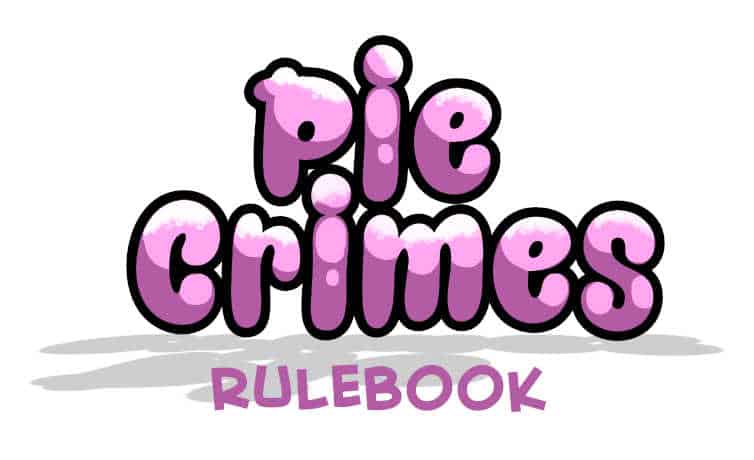 The Candy Kingdom’s not so sweet for bakers like you. People need cakes and they don’t care where you get ’em.

So, are you willing to risk the Gumball Cops or the ire of the Cake Syndicates to make yourself a bit of scratch? Sell out your friends? You can get away with a little –

But not for long.

This is the story of a handful of cake bootleggers, hardworking baking professionals every one, and the things they need to do, dealing with the upper crust and the bottom of the pie pan.

Pie Crimes is a game for up to six players that requires them all to be easily able to check a single card that becomes public information. A large playing area may make that awkward for some people. There is a small amount of shuffling of a deck of five cards.

In your copy of Pie Crimes, you should have the following cards for play, and also two Face cards that make the game look pretty in its box:

12 Pairs of Pie Cards, with the same card backs and different card faces

Give each player a score card, and two matching pie cards. Then, shuffle up the newspaper deck and take one card from that deck and set it aside.

Each turn, every player picks one of their two cards, and puts it on the table, face-down. Then, when everyone’s done that, a player flips the top card of the Newspaper deck, to see what the current news is about, and who scores points.

The Newspaper cards show four different options, and their rewards:

Most rewards and penalties are points: -1, +1 or +3. Turn your card so it shows your new total at the top, from your starting total of zero.

Some news cards have “XX” as a penalty. When you earn an XX, it means the Candy Kingdom authorities have been so careful in their crackdown on street cakes, you couldn’t deliver on time. Your contacts in the criminal underworld have punished you for this—by biting one of your thumbs.

When a player scores an XX, they have to play with that thumb tucked in. Some players can’t do this, and that’s okay—it’s for flavour, not challenge. Players can get the XX punishment once, but the second time, it knocks you out of the game.

This is why you set aside one Newspaper card at the start of the game: You don’t want anyone to be sure what cards are remaining in the deck.

Whenever the Newspaper deck runs out of cards, just take all the cards—including the card previously set aside—and shuffle them up. Remove one card from it face-down again, and that’s the new newspaper deck.

The first person to reach 9 points wins the game. That’s it! If two or more players reach 9 points at the same time, they all win the game, together!

You’ve heard of the Prisoner’s Dilemma? That’s all this game is: You’re deciding if you can trust all your friends, if you want to cooperate to win the game, or if you’re willing to backstab someone, to get a little ahead.

Have fun in candyland!

Special Thanks:
To Æryn, for logical space reasoning
To Chris, Riley, and Archie for the academic notion
And to Elli and Fox for opinions about tasty cakes