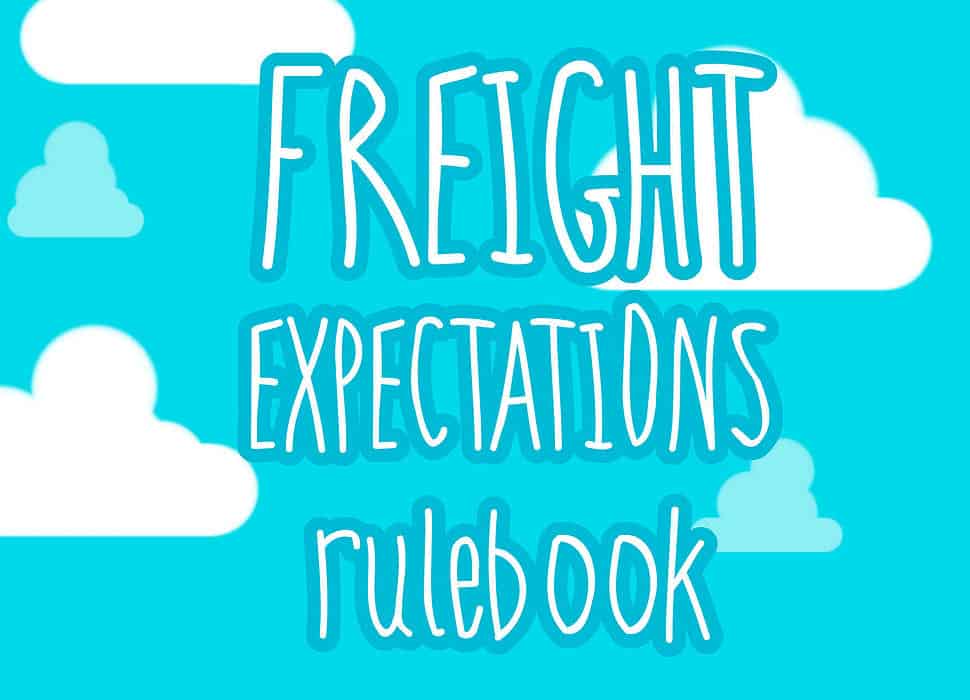 Freight Expectations needs some table space. Cards need to be visible to every player. Cards of similar colours have distinctive symbols on them, but players who struggle with reading may find this difficult for long periods. Players won’t need to read much fine rules text without help—all information in this game is public. Players won’t need to lie, and the deck of cards will only need to be shuffled after long periods of play.

In your copy of Freight Expectations, you should have these cards:

Each Ship has an order card, which you use to track what order the ships are moving in.

Your goal in Freight Expectations is to make money, represented by the Millions of Megabucks currency (MM). As much as the game can measure it, the winner of the game is the person who’s made the most money, and you make money by picking things up at Port Gong and selling them in Bucks Grange—and then back again.

First, each player picks a boat. The boats have their names on the aft (that’s the back-endy bit of the boat), and an order card. Each player puts their boat in front of them, where they can easily access it, and put the order cards in a central space.

Then, set up Port Gong and Bucks Grange and their marketplaces. Put each flag card in the play area, with some distance between them to make it clear they’re separate spaces. Then, shuffle the deck of goods cards, and deal six of them to each city face-up.

This deck of cards is also the game’s currency; take five cards from the top of that deck and give them to each player, face-down.

Whenever a player is given currency, it’s a face-down card from the top of this deck. When they spend that currency, the spent cards are shuffled and put on the bottom of the deck.

You’ll see this described as paying 1MM or receiving 1MM.

Don’t look at your currency cards’ face. The information on the face of your currency could hypothetically be used to extrapolate what is more or less likely to be in the deck—and rather than encourage players to think like that, this information is hidden. Put the Ship Storage Upgrade cards in a stack where players can access them.

Shuffle the Weather cards and put them where players can see them. Then, take the top two cards of this weather deck, and turn them sideways, setting them under that deck. Those won’t be drawn when you flip cards off the weather deck. This deck represents a week of time—and those two missing cards are Saturday and Sunday.

Finally, pick one of the cities at random, shuffle the order cards, and put them next to that city’s card pointing at the city’s flag. This determines the Order of Play for the first round and the city you’re starting in.

Once the game has been set up, it starts with the first auction.

The auction is the way the towns determine which contractors get the right to transport goods. You’ll see that each card has two goods on it. You are bidding on cards rather than on the individual containers.

Starting with the player first in ship order (they had the most time to get to the auction early), players say how much they want to pay for one load of goods. If nobody wants to bid more, going in order, that player purchases the good, and removes it from the marketplace, then the auction moves on to the next good card.

When you win an auction, there’s a little period of negotiation with the people who will load it onto your boat, so you’re not available for the next round of bidding on the next good.

You can spend, at most, 5M in any given auction round, because the auction organisers don’t intend to deal with fiddly small change. This is 5M for all the lots you bid on, in total.

For convenience’s sake, it’s recommended you set aside 5M when you enter the auction, so you can tell how much you’ve spent.

At the end of the auction, replace each card purchased from the top of the Goods deck.

If an auction ends and nothing was bid on, there’s a market reshuffle, and all the cards are put back on the bottom of the deck and replaced. If at the end of a round of auctions, you have gained no goods at all, you can pay 1M and buy the top card of the deck. You can only do this once each Auction and only after all the lots are sold.

After the auction, players load their vessels. You don’t own any warehouses or storage facilities, so your boat is where everything gets loaded or unloaded. You can put all the goods you purchased this auction on your boat in the order you purchased them.

When you load a good, you pick one of the two goods on the card, and put it on the boat, oriented upwards. You don’t want to ship your goods upside down, after all. Tuck the new card’s bottom half under the card it’s being stacked on top of.

When the ship gets unloaded, goods of the same type can be unloaded together, so bear that in mind when you load up!

When you rearrange your boat’s already-loaded goods, you can’t turn the good card around to turn it into the other container on the card. You left that container behind a long time ago, it’s gone now.

Because these boats are really big and slow to get started, it’s very hard to catch up or overtake while travelling between Bucks Grange or Port Gong. This means that ships tend to arrive in the same order they leave port in.

Once ever player has loaded their boat and left the port, flip the top card of the Weather deck and see what happens.

There are four possible types of weather you can see:

When you lose goods off your ship, goods lost come from the top of a stack. You can’t get rid of the bottom container in a stack because you like the goods on top of it more. If you only have one good on your ship, the good news is, you can’t lose that card.

When the weather deck is empty, shuffle up all the weather cards and set two cards aside, as in the Setup phase. It’s a new week starting!

When you arrive in a city, you immediately unload one shipment of your goods, whereupon it is sold and you’re given its current rate. The rate is determined by the value in the corner of the goods minus the number of goods in the marketplace of the same type. If an area has a lot of cheese, they’re not going to pay full price for cheese, after all.

You can pay 1M to unload an additional good. This takes time, and delays you one round, moving you down the turn order for the next turn.

When your boat is empty, you can buy upgrades if you want them.

Once all the unloading is done, there’s another auction, and play continues!

Every time the weather deck runs out of cards, a full week of time has passed in trade. The game lasts for two weeks, after which point, players unload their vessels for the final payment.

At that point, the player with the most money has the most money, and must decide for themselves if this acquisition has made them any happier.

If you want, players can play the game for more weeks, but agree on this number before the game starts.

Special Thanks to my Patreon Patrons for providing me with names and ideas for what to put in these silly containers on these silly boats with their silly names that take silly goods between silly cities of silly people.