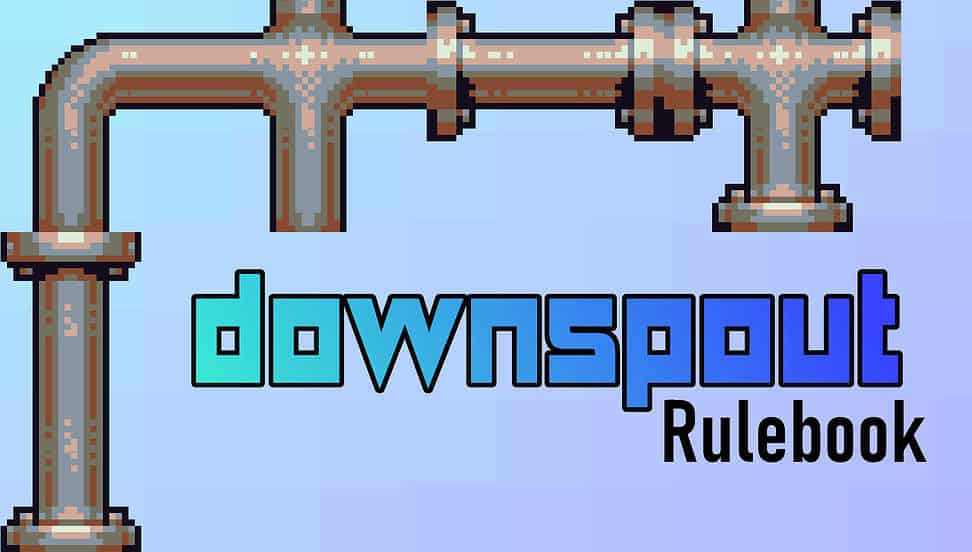 To play Downspout, you’re going to need a bit of physical space—enough for each player to have a 3 x 3 grid of cards before them, and, room for a common pool of cards. Players won’t need to do any reading, and they shouldn’t need to do any complicated math, communicate with one another much, or touch one another. They will need to be able to reach each others’ cards.

In your copy of Downspout, you should have 54 cards – 53 pipe cards, and 1 Pressure Check/Flood card.

Each of cards shows on one face, a loose pipe, and on the other a locked pipe. When setting up the deck for play, make sure that all pipe cards show their loose face up, and the Pressure Check card is facing up as well. The Locked Cross Pipes have the same front and back. Don’t worry about them for now!

Downspout is a game where you’re given a set of 9 cards, that represent your sequence in a pipe puzzle. You need to solve it, but there’s a flood coming that will undo your work if you’re not finished in time. Your pipes will look something like this:

You’re trying to beat the flood. Your pipes have an intake, at the left hand side of the top left card, and an exit, at the right hand side of your bottom right card. So you want water to flow through your pipes, when the flood comes, like this:

This setup has problems, though—because when the water flows, every point the water leaves your pipes except for your exit is a leak. In this example, you have leaks like this:

These leaks are marked against your overall value. When the flood comes and players’ scores are checked, the winners are the players who:

First, take the Pressure Check, Delay Cross, and Swap Cross cards out of the deck, and set them aside. Shuffle the remaining cards, and deal to each player a 3×3 grid of cards. If you’re concerned about players seeing what’s coming from the top of the deck, you can deal cards off the bottom. When these cards are placed, players don’t get to rearrange them at all – they are stuck with the 3×3 grid they get to start with. Don’t worry! You’ll get to change it later!

Then, once each player has their arrangement of pipes, take the Pressure Check and special Cross cards and shuffle them into the deck. Then, deal one card from the top of the deck for each player, in a row.

Here’s an example set-up for a game with four players.

Once you’ve done this, determine what player gets to go first by any method you like.

On your turn, you can swap one of your pipes with a pipe anywhere in the game, except:

When you swap a card, you can put down the swapped cards oriented how you like. You can’t turn a card sideways – if you do that, it won’t line up properly and fit with other pipes! – but you can rotate it around when you put it down.

If you don’t want to move pipes, you can instead lock a pipe, by turning it over. Once it’s locked, it can’t be moved at all, even by you, even if you want to spend a turn unlocking it!

At the end of your turn, after you’ve swapped a card or locked a card, take the top card of the deck, and put it on the smallest pile of cards. If two or more piles are the same size, you choose where to put that card – letting you limit the options of other players!

When you move the top card of the deck, you might reveal the Pressure Check card. If you do, take that card, turn it upside down so it shows the Flood side, and shuffle it back into the deck. You can’t shuffle the deck such that the top card shows the Flood, so if you do, shuffle again!

The Flood, and Winning

Oh, and one last rule: If any player sets up their pipes so water flows through all nine cards, they get to ignore half their leaks, rounded down!

Have fun, and stay dry!

Creative Commons Resources: The Pipes in this work come from Opengameart.org, and are created by Surt

Special Thanks: To my sister and mother, who reminded me of a game that turned out to be totally different