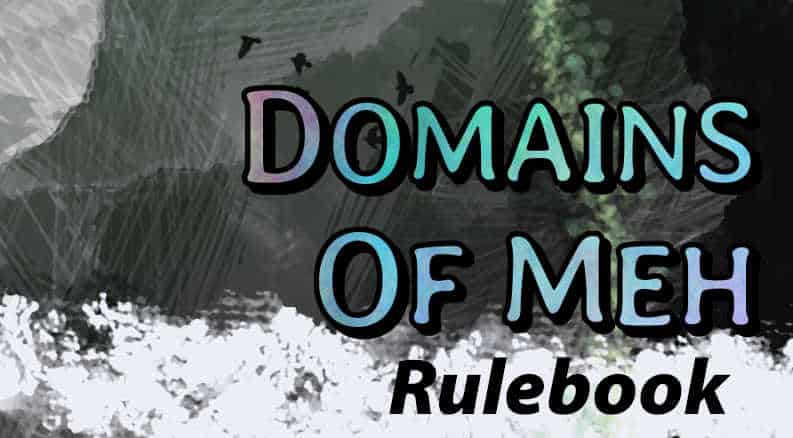 The calendars of Meh speak of the great wars of territory. The time when the four cultures of Meh met and decided who would own the greatest control of the country. So important is this history, they say, that they must re-meet and have the same war every few years.

The problem is, nobody’s really into it.

And now a war has broken out, on schedule, in which nobody really wants to fight.

You should only need to shuffle once.

In your copy of Domains Of Meh, you should have the following:

In Domains of Meh, you and up to three of your friends are trying to win a war where nobody ever wants to fight. You want to send your soldiers to territory and hold it, but since all soldiers want to avoid fights, they’ll leave if it’s a fight they can’t win.

First, each player picks what army they want to play—the dwarves, elves, humans or orcs.

When you have the army you want to play, you shuffle that deck and draw three cards.

Then, set up the territory. Shuffle up the Map cards, and lay them face-down in a 3×4 grid (or 4×3, either works fine). Then turn them face up. All the territory cards that match their neighbours make a single, larger territory.

Then, the youngest player gets the first turn1.

[ 1 Or some other method for determining first player. I’m not your dad. ]

On your turn, you get to send one card from your hand to a territory card somewhere in Meh. Easy, right?

If there’s an army on that territory, you have to check to see which army looks bigger. The number on each card shows how big and scary it looks—1, 2, or 3. Some armies (dwarves and orcs) get to win ties, but otherwise, to move an army, you need to move it with a bigger army.

When a bigger army approaches a smaller army, the smaller army runs away home. Put those cards in your discard pile.

You can’t send an army to a territory with an army in it you control. If you dislike all the cards in your hand, you can choose to take a card from your hand and put it on the bottom of your deck.

After you’ve finished your turn and sent out your army, you draw a card from your deck, if there are any cards left.

When all the territory in the game has been claimed, (so there’s an army in every territory) or when players all run out of cards in their deck, the game is over and it’s time to see who won the game by scoring the most points.

First, each player gets 1 point for each territory they control.

Second, each army has a special rule that applies for each member of that army in any territory.

What’s adjacent mean in this context? It only means up-down and left-right, so it doesn’t include diagonals. The people of Meh have not developed diagonal technology yet.

To Jeb, who helped inspire the non-conflict war game